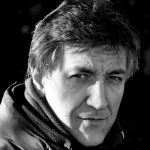 He was born in Leòn (Spain) in 1962. He studied Illustration and Graphic Design at the Art School in Oviedo and Madrid. He has illustrated more than 80 books, and written some of them too. He has collaborated with some of the most prestigious publishers in the world and his books have been translated into 18 different languages. He has illustrated the works of Cervantes, Shakespeare, García Lorca, Rodari, Melville, Čechov, Van Gogh and many more.
He currently works both as an illustrator and as a professor, holding illustration courses and conventions at universities and art schools in Spain, Italy, Colombia, Ecuador, Mexico, Iran, Cuba, Brazil, Venezuela, Israel, Singapore, Croatia, Portugal, Chile, Argentina, France, Malaysia, Russia, China etc.
His works have been displayed in many personal and collective exhibitions across the world. His many awards include: the National Prize for Illustration in 2005 and two honourable mentions for the Prize within the Bologna International Book Fair in 2008. He was one of the finalists at the Andersen Prize in 2012 and he was the candidate for Spain during the Astrid Lindgren Memorial Award (ALMA). In 2015 he was awarded a Golden Apple at the Bratislava Biennale and in 2016 he won the Golden Medal of Times Illustration Book Award 2016 in China.

“The work of Javier Zabala is characterised by the combination of different elements and by the expressionism that he applies to children’s books. None of his works leave us indifferent; they always inspire continuous discoveries of elements that enrich the text with his avant-garde and pictorial language. Every one of his books is different; he never repeats the same patterns, and yet there is always something that connects them”.   – Rafa Vivas, Director del Màster iconi

“During his brilliant career as an illustrator, Javier has undertaken some undoubtedly complex works, such as illustrations for “Don Quixote”, for “Santiago” by García Lorca (for which he gained an Honourable Mention during the Bologna Book Fair) and for an illustrated edition for adults of Shakespeare’s “Hamlet”. He has also illustrated various stories by Melville and Rodari. In short, he made sure to gain a wide experience! He probably doesn’t hesitate when it is time to face new challenges, and this is an attitude that I really appreciate, because it shows a strong will to keep on evolving, researching and studying; a will that, in my modest opinion, a professional should never forsake. All of his books are different from one another, and yet they are united by a thread that resides in his sensitivity, in his vision of the world and in his ability to express them through images, adapting the language to every specific audience.”  -Cristiana Clerici. Specialist in picture books (The tea box / Seven Impossible things before breakfast. Blogs).