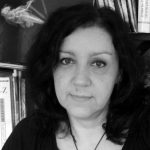 Born in Pordenone in 1972, she studied advertisement graphics and photography. Following her love for drawing, she approached the world of editorial illustration for children, publishing more than 40 books with Italian, European and international publishing houses. She is also very passionate about artistic research, and she uses various techniques such as painting, ceramics and resin.  Apart from various illustration exhibitions, she has displayed her work at various events and personal contemporary art exhibitions, both in Italy and abroad, and in collectives of artist’s books. She has taken part in a number of illustration exhibitions including the following: the Illustrators’ Exhibition within the Bologna Children’s Book Fair; the Portuguese Biennale “Ilustrarte 3” and “Ilustrarte 4”; “Le immagini della fantasia” in Sàrmede (Italy). In 2009 she was selected for the “8th Ibby Regional Conference” of the Northwestern University of Chicago, which included her among the 23 best illustrators within the “Illustrators’ Exhibition, 2009” at the Bologna Children’s Book Fair. In 2010 the magazine “Dpi” included her among the 12 best illustrators within the Bologna Kermess, showcasing her works in two exhibitions in Taiwan: “In fingers, extra space” (Creative Park for Taipei Toy Festival, Taipei) and “Imaginary Fairy Wonderland – Dpi International Group Exhibition” (Kaohsiung City). In 2012 the Centre for Cultural Initiatives “Casa A. Zanussi” in Pordenone purchased some of her works for the “Concordia 7 Collection”, after her 2010 exhibition “Sentieri illustrati”.