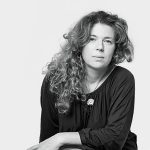 She is a Hungarian illustrator. She was born in Budapest but has been living in Italy since 1997. In Hungary she studied Applied Art at the Nyugat-Magyarorszagi University in Sopron, specialising in Packaging Design. After gaining some experience in graphic studios, she approached the world of illustration by attending a course in Sàrmede in 2005. That same year she published her first book.  So far, she has illustrated 11 books for children and 4 books for adults, working with Hungarian, Italian, Polish and American publishers. She works with traditional techniques (acrylics, collage, pencil) and digital and mixed media. She displayed her works at the Bratislava Biennale in 2011 and 2013, at the Turin Book Fair in 2008, at the International Illustration Exhibition “Le immagini della fantasia” in Sàrmede from 2007 to 2012, and in many other collective and personal exhibitions, both in Italy and abroad. In 2013 her cover for the book “Folyekony tekintet” (ed. Libri, Budapest, 2013) was selected by The Wall Street Journal among the 12 best covers at the Frankfurt Book Fair. Since 2012 she has been teaching graphic design at the Enaip FVG training centre in Udine, and she holds courses and workshops on illustration in various schools and institutions. In 2015 she collaborated with the Centre for Cultural Initiatives in Pordenone, curating an exhibition that gathered 14 of the best Hungarian illustrators within the event “Sentieri Illustrati”.