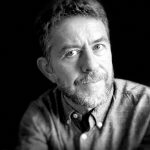 Paolo Domeniconi has been a freelance illustrator since the early 90s and initially worked in advertising. He later discovered the world of children’s books and started to publish his works in collaboration with important Italian and foreign publishers: Mondadori, EDT, Grimm Press, Houghton Mifflin Harcourt, The Creative Company and many more. His illustrations have been published in Italy, Spain, the UK, the US, Brazil, Korea, China, Taiwan and Japan. So far, he has illustrated more than 45 books, together with many book covers and various editions for schools. He has held many workshops in Padua, Milan, Bologna and Palermo. Among his acknowledgements, in 2017 he was awarded the Illustration Prize “Emanuele Luzzati” (XVI edition) and he received a Nomination for Professional Category during the Little Hakka International Picture Book Competition.