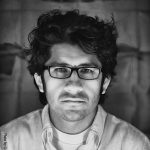 He was born in Mexico in 1973. After graduating in scenography at the National Institute of Fine Arts, he studied drawing and the human figure at the Enap school. He is an extremely cultured illustrator and he curates a blog in which he explains the philosophical and literary depths behind his vision of life and his illustration. His many books have been translated and published in Mexico, Brazil, the US, Italy, Spain, France, Portugal, Russia, Korea and Japan. He has been awarded many prizes for his career, including a nomination for the Astrid Lindgren Memorial Award, one of the highest international acknowledgements. In Italy, his books are published by Zoolibri and Logos Edizioni. He was guest of honour during the 31st edition of Le immagini della fantasia.