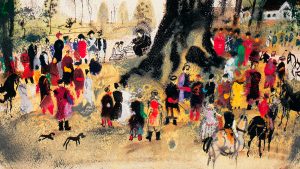 With this year’s edition (the 36th), taking small steps but with great determination, Le immagini della fantasia (The images of the imagination) enters a new cycle. It is an important moment for us, a moment of transition and evolution, of growth and construction, based on the steady foundations laid by Štěpán Zavřel back in 1983. On these foundations, through the years, we have created what is now the Casa della fantasia (House of Imagination), a living and concrete reality at the very heart of Sàrmede, and at the same time a fluid and moving vessel that lives in the eyes and dreams of those who visit us.

A collective reflection that helps us to rethink the role of beauty – and ultimately the right to beauty – in our world. No matter how old we are, no matter where we come from or what our story is, without any pre-established formulas or limits to the imagination. Because the journey in search of beauty – and the efforts to preserve it within a society that is overflowing with pre-packaged images that we often lose their sense – requires a free and unbound dialogue. This is the kind of dialogue that will take place this year, not only among the thirty guest artists, but also with anyone who enjoys “Le immagini della fantasia” with their eyes, minds and hearts wide open to create an everlasting exchange.

Therefore, Sàrmede increasingly becomes a place in which beauty is not passively contemplated, but lived and interpreted. This is a right to be conquered and claimed, it is a hope for the future. A small revolution in the making that starts its march almost twenty years after Štěpán Zavřel’s death and that, in the end, is our way of honouring his memory.

In this video, a small taste of the Le immagini della fantasia 36 creative revolution.