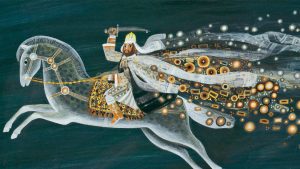 The idea of setting up an illustration exhibition dedicated to children dates back to 1982 and was first brought up during a friends’ meeting in Štěpán Zavřel’s house, in the woods of Rugolo (Sàrmede).

At that time in Italy the world of illustration for children was still little known, and only followed passionately by a small group of professionals in the field. The only event dedicated to the industry was the Bologna International Children’s Book Fair. Therefore, it was necessary to rebuild a culture of images, focusing on their central role as a communicative means that can be used to characterise, interpret and recreate the text.
A year later, in 1983, the first edition of the International Children’s Book Illustration Exhibition was inaugurated.

After a few years, in 1988, Štěpán Zavřel started the first illustration courses in his own house, building the foundations for what would become the International School of Illustration, which was the first in Italy to offer specialised courses on illustration for children.