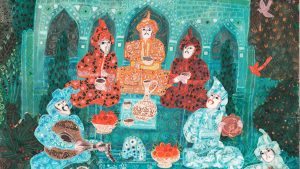 Štěpán Zavřel’s art has always been present in the exhibition “Le immagini della fantasia”. This year, enhancing the close connection with our Guest country (Iran), we have chosen the book Il Ritorno di Ario, da Ciro il Grande a Ciro il Piccolo (Quadragono Libri, 1974). It is a series of tempera and watercolour paintings where we can clearly recognise the influence of Persian culture on Zavřel’s style, which was already visible in the Byzantine atmospheres typical of his works.

Within these images, characterised by a detailed and always gestural execution, we can admire how the artist elaborates patterns, rhythms and various directions. Starting from a chromatic scale of light blue and turquoise, he develops a scenario that is immediately recognisable, with pointed arches, Arabic domes, turbans and colourful characters. In this way he manages to create a plethoric, rich, fantastical world, which, like a garden of Eden, constantly encourages us to enjoy beauty and use our imagination.

Štěpán Zavřel was born in Prague in 1932 and arrived in Italy in 1959, after an adventurous escape from his country. He was a versatile and eclectic artist; he studied painting, animation, scenography and theatre costume in Czechoslovakia and later in Rome, Munich and London. In 1968 he settled in Rugolo (Sàrmede), where he established an international network of artists and creative people. He displayed his works in galleries and museums all over the world. In 1983, thanks to his idea, the International Children’s Illustration Exhibition was set up, followed in 1988 by the International School of Illustration. He died in Sàrmede in 1999. On the occasion of the 36th edition of Le immagini della fantasia, the publishing house Bohem Press Italia will reprint the illustrated book Jacopo the jester.