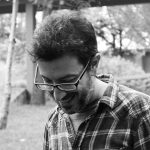 He was born in Zaragoza (Spain) in 1969. He studied illustration at the Escuela de Artes de Zaragoza and later History of Art at the university in the same town. He has collaborated with publishers such as Caja de Cerillos, Fondo de Cultura Econòmica, Libros del Zorro Rojo, Castillo, SM, Anaya, Edelvives, OQO, Kite Edizioni, Alfaguara and many others. He has been awarded various prizes, among which the Lazarillo de Ilustraciòn in 2007 for the illustrated book “Ramòn” and the Special Prize “I colori del Sacro” in 2012. He was awarded honourable mentions by the Lisbon Biennale, Ilustrarte (2015) and by the Sharjah Children’s Reading Festival (2016). He currently lives in Mexico, where he teaches illustration at Centro University; drawing, cinema and television at the CASA educational centre; narrative illustration at the Faculty of Art and Drawing of the Universidad Nacional Autònoma de Mèxico.