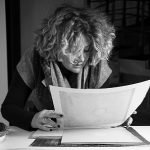 She has worked as an illustrator and for many years she has been practicing chalcography, experimenting with various techniques. While looking for more eco-friendly printing techniques, in 2011 she discovered Mokuhanga Japanese xylography, which became her main activity. In 2012, together with 5 other artists from all over the world, she was invited to a 35-day artistic residence on Mount Fuji in Japan. She attended the first, second and third International conventions on Mokuhanga (Kyoto, 2011; Tokyo, 2014; Honolulu, 2017). Two of her prints were displayed during the Honolulu convention.