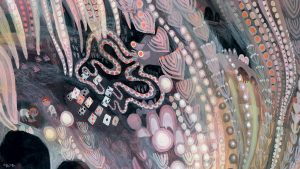 A new Museum, completely rethought and renewed in its contents, was inaugurated on Friday 22 February at 6.30 pm in Sàrmede, to commemorate the twentieth anniversary of the death of Štěpán Zavřel.

The Štěpán Zavřel Museum, dedicated to the work and intellectual heritage of the Bohemian artist who chose to live and establish his own artistic and creative center in Sàrmede, was reborn in a contemporary way and projected into the future.

The Štěpán Zavřel Foundation entrusted the renewal to the artistic director of the exhibition Le immagini della fantasia, the Mexican illustrator Gabriel Pacheco. The spaces, on the top floor of the municipal house, are the same that from 1983 to 2013 hosted the exhibition Le immagini della fantasia: the symbol of historical continuity and of a reality that has profoundly characterized the territory and identity of Sàrmede, making it unique.

Go to the Museum page